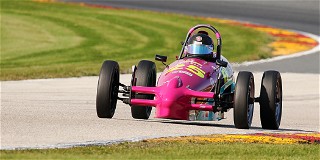 Wednesday at the Runoffs is Hawk “Brake Through Performer” day. The driver in each of the 26 car classes who shows the biggest improvement on yesterday’s qualifying time gets a set of Hawk brake pads for their racecar, tow rig or street car.

Hawk Performance—the Official Brake Products of SCCA since 2003—leverages its experience on the track and technology used in aerospace and the military to make the best brake pads and rotors for every vehicle's needs. The company’s extensive Research & Development department, including a PhD in friction and 23 dynamometers, produces first-class products in the USA. Visit hawkperformance.com to learn more.

After careful consideration and help from public nominations, the 2020 Formula Vee Hall of Fame class has been announced! Formula Vee (FV) racer Graham Loughead founded the FV Hall of Fame in 2019 with help from fellow FV stalwart Lisa Noble. During last year’s Runoffs at VIRginia International Raceway, the first set of FV influencers was inducted. The second class will be recognized this evening at the Runoffs with a ceremony slated to begin around 5:15 p.m. Central Time in the Road America Winner’s Circle.

George Fizell, Ed Zink, Michael and Al Varacins, and Brad and Rod Stout are all part of the 2020 Formula Vee Hall of Fame class. Fizell is a four-time SCCA® Runoffs® champion and a President’s Cup recipient. Zink is the owner of Zink Cars and has built many different types of formula cars over the years, cars that have won 10 championships, including five straight from 1966 to 1970. Michael Varacins holds the record for the most championships in FV at seven and has a President’s Cup to his name. His father, Al Varacins, helped build the Speed Sport cars and was a FV driver himself. He was also one of the first creators of FV’s new disc brake package. Brad Stout holds five FV championships, one in a Protoform and four in a Vortech. Brad’s father, Rod Stout, is the Vortech creator—a​ chassis which has won the Runoffs eight consecutive years in a row with three different drivers.

Go to​ formulaveeproject.com​ to learn more about the Hall of Fame mission and review in-depth biographies of all inductees.

Audio-only coverage of Runoffs qualifying continues today from Road America in Elkhart Lake, Wisconsin with commentary again supplied by longtime Runoffs broadcasters Gregg Ginsberg, Larry MacLeod and Tom O’Gorman. Audio commentary can be heard trackside and on 87.7 FM for those lucky enough to be on site at Road America. For those elsewhere, follow Runoffs qualifying at SCCA.com or the Performance Motorsport Network.